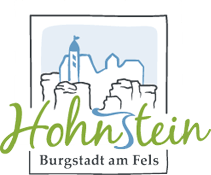 Hohnstein – on the trail of history

This is how it all started! The history of the town and castle of Hohnstein is closely linked to the landscape of the Elbe Sandstone Mountains. Raw materials such as wood and stone, but also water-rich river valleys and wide plateaus offered good conditions for settlement. Despite the rugged relief, the area was well developed. Urban and unspoilt nature are still close together today. 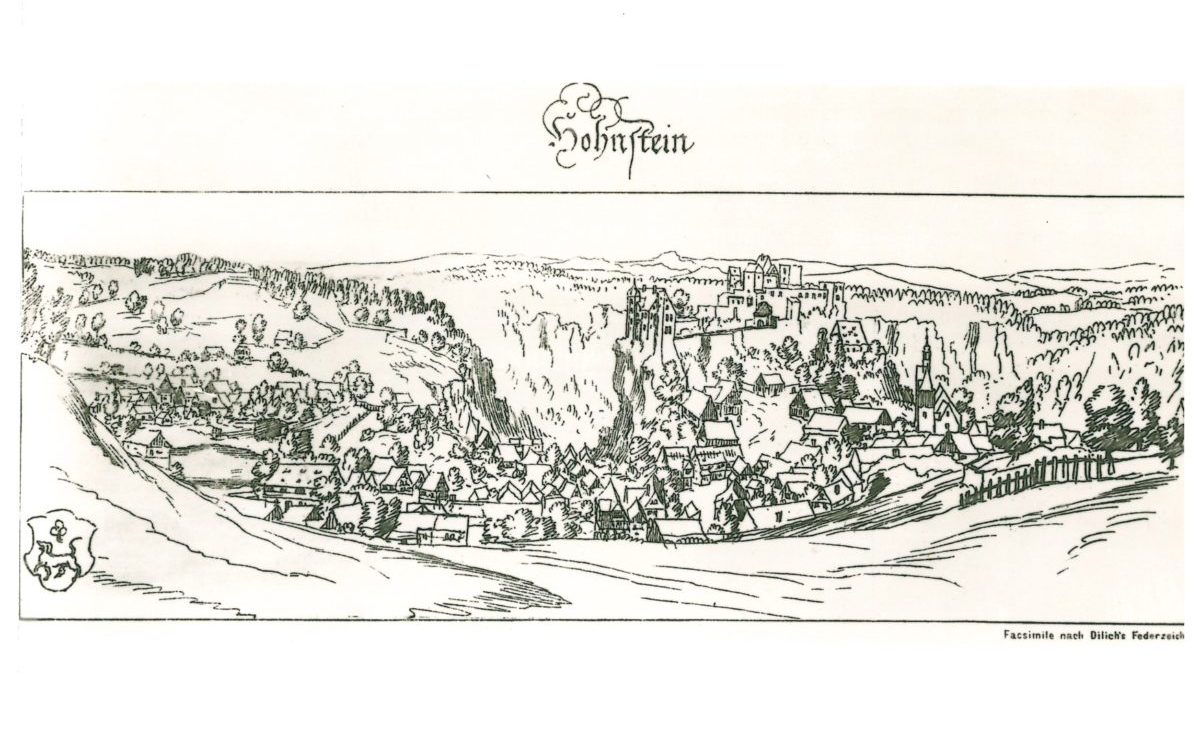 The castle on the Hohen Stein

Hohnstein owes its name and its origin to the castle on the Hohen Stein , which is said to have existed before 1241 . The castle complex was probably built as a Bohemian border fortress to the margraviate of Meissen. The plateau of the steep rock was particularly suitable for building a castle. The area is free-standing on three sides and high above the river valley offers a good overview of the Polenz, which at that time marked the border. The first documentary mentions are 1317 as Hoinstein and 1333 as territorium Honsteinense . 1353 the Bohemian nobleman Hinko I. Berka received the castrum Hohensstayn from Dubá as a fiefdom from the Bohemian king, the later Roman-German emperor Charles IV. The coat of arms of the Bohemian noble family – two crossed oak branches – can be seen today can still be seen on the penultimate passage to the upper castle courtyard.

Outside the castle fortifications, servants such as hunting dog handlers and dog breeders, but also hunters, servants, lumberjacks, farmers and day laborers were probably the first to settle. Levies and compulsory labor from the residents of the surrounding villages secured the livelihood of the lords of the castle. 1443 the rule of Hohnstein came into the possession of the Saxon Elector Friedrich II. the Meek (1412-1464). When the Wildenstein rule in Upper Saxon Switzerland was passed to the Wettins in 1451, the border between Bohemia and Saxony that still exists today was created.

Hohnstein – the development as a city

1444 Hohnstein will probably get the town charter, because 1445 will the statichen zcum Honsteyne as well as in the stadichin under dem Honing stones mentioned in a document. A document cites the frye city law , which allowed the residents to take advantage of the frey brewing, serving, baking, slaughtering, buying and selling . Hohnstein developed into a lively craft town. Since 1522 , lime has been mined underground on the western slope of the Schanzenberg and further processed in a kiln. From 1615 , two annual markets and one yarn market per week were allowed in Hohnstein. As a result, the guild of linen weavers should be most strongly represented in the city in 1707. Today’s town hall and 1721 the pharmacy on the market were built 1688 . These two buildings were preserved during the devastating city fire 1724 . In the following year the city church was built by 1728 according to plans by George Bähr, the builder of the Dresden Frauenkirche.

In the meantime, the castle remained in the hands of the Elector of Saxony. Located in the middle of forests rich in wilderness, the castle was mainly used as a hunting lodge in the 16th and 17th centuries. For this purpose, the lower castle (today House 1) was built 1550 and a bear garden was created 1609 on the outskirts of the city. Until 1861 the castle was the official seat as well as a prison and was later used as a state reformatory . After the constitution of the Weimar Republic, the castle served as a branch of the Bautzen prison from 1919 to 1924 . From 1926 the castle was used as a youth hostel. Summer camps, courses, seminars and conferences took place. 1928 also moved the puppeteer Max Jacob (1888-1967) with his group to the castle. In addition to the tours, the Puppet Theater played in Hohnstein during the summer months. International delegations were also guests at the castle, with the visit of the Bengali philosopher and poet Rabindranath Tagore (1861-1941) being a special highlight in 1930 . As early as March 1933 the castle was supposed to become a protective custody camp Hohnstein for 18 months. After that, from 1935 onwards, the facility served the Hitler Youth as a Reich Youth Hostel. With the beginning of the Second World War 1939 a prison camp for Polish and later also French officers was established. 1941 the officers’ camp was closed and Soviet and Yugoslav prisoners of war were interned at the castle. After the end of the war 1945 refugees found accommodation here before a youth hostel could be reopened in 1949 . After 1990 the castle remained the property of the district and from 1996 was leased to the Friends of Nature Association, which used the area as a youth hostel and event location until 2017 business. 2018 the city of Hohnstein took over the administration of the castle.

From the late 18. Century an increasing tourism developed in the Elbe Sandstone Mountains. As early as 1807 , inns on the market in Hohnstein such as the White Deer or Sächsische Schweiz , the later Hotel Am Höchst Stein , adjusted to it. Middle of the 19th Century more and more tourists came to the area. In order to improve the economic and tourist development, the Schwarzbachbahn was built 1897 from Hohnstein to Kohlmühle with a connection to Bad Schandau. However, the hoped-for upturn largely failed to materialize, so operations were discontinued in 1951.

The road connection to Hohnstein was achieved after the First World War. From 1909 to 1922 , the Wartbergstrasse was first reconstructed from the Polenztal to the Hocksteinschänke. This section should soon be of interest to motorsport. The connection to Hohnstein, the Mühlbergstraße was built 1924 and 1925 . In five hairpin bends and a length of 940 meters, the road overcomes a height difference of 110 meters to the Hohnsteiner Markt. On May 30, 1926 , the first Hohnstein motorsport race took place on the route from Polenztal to Hockstein in front of 10,000 spectators. The second and 1930 the third race followed on May 29 1927 . Further Hohnsteiner hillclimb races were held on September 18 1932 and on September 10 1933 . From 1933 to 1939 , the route was expanded into a ten-kilometer circuit, the Deutschlandring . The last race took place on October 14th 1951 .

Pictures and postcards come from the collection of Hohnstein’s honorary citizen Eberhard Barthel.

Former bar mill and castle, outline etching around 1810 by an unknown artist